HUD terminated its contract with a Hartford complex over "the owner's failure to remedy major threats to health and safety at the property." The action stems from a three-month investigation by NBC News.

The Minneapolis-St. Paul region is losing more affordable housing than it is building, according to a study by a regional policy-making board.

Freddie Mac’s new non-LIHTC loans are “creating quite a buzz” among developers of workforce and affordable housing. Find details about Non-LIHTC Forward here.

An apartment complex to be built from shipping containers is the “bleeding edge” of affordable housing. Analysts do not agree whether shipping-container housing is affordable. Here’s a gallery of proposed projects.

One to smile about—Washington DC nonprofits set aside small parcels to preserve trees.

A quarter of U.S. residents living in poverty do not receive support from any of the federal government’s safety net programs, according to an Urban Institute study. Five key learnings from the study are here.

A study by a financial-stability advocacy group concludes that 40 percent of American households are “liquid asset poor,” meaning they don’t have enough savings to “make ends meet at the poverty level for three months if their income was interrupted.”

Nearly half of affordable housing tax credits issued in Ohio between 2016 and 2018 were for projects classified as suburban—“places where it historically hasn’t been.” One factor cited by experts: average monthly rents and home prices have boomed, but wage growth hasn’t. Here’s why investors should pay attention.

10-Minute Read; Worth Your Time

Does Governor Newsom have a workable plan to solve California’s housing problem?

New research from the Public and Affordable Housing Research Corporation (PAHRC) finds that most residents in publically supported homes who can work are, but they’re employed in our lowest-wage jobs and need training and childcare to access better-paying jobs. 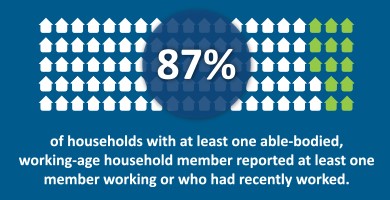