Claim: After spending the night at a relative’s apartment, a visitor exited the building on an early winter morning and slipped and fell on black ice in the parking lot. As a result of the fall, the man suffered several fractures that required surgery. He filed a claim against the housing authority that manages the apartment building, alleging that it was negligent in keeping the parking lot clear of ice. In response, HAI Group filed a motion arguing that the housing authority was not responsible for protecting the plaintiff from an ‘open and obvious’ natural accumulation of ice. 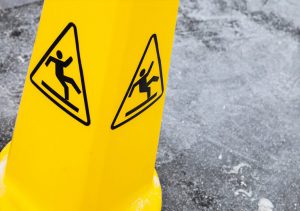 Outcome: The court acknowledged the axiom that this case occurred in the wintertime in a state where ice and snow are commonplace. Furthermore, the judge denied the plaintiff’s claim, citing state law that says landlords do not have a duty to warn people of, or remove, naturally accumulating ice or snow on a property. The plaintiff could not prove that this particular patch of ice was caused by something unnatural or was due to the landlord’s active negligence of a contractual obligation. Thus, the housing authority prevailed in this case.

If you need to report a claim, contact us as soon as you can at . Early reporting typically leads to more favorable outcomes. Consider bookmarking our claims page for quick access.